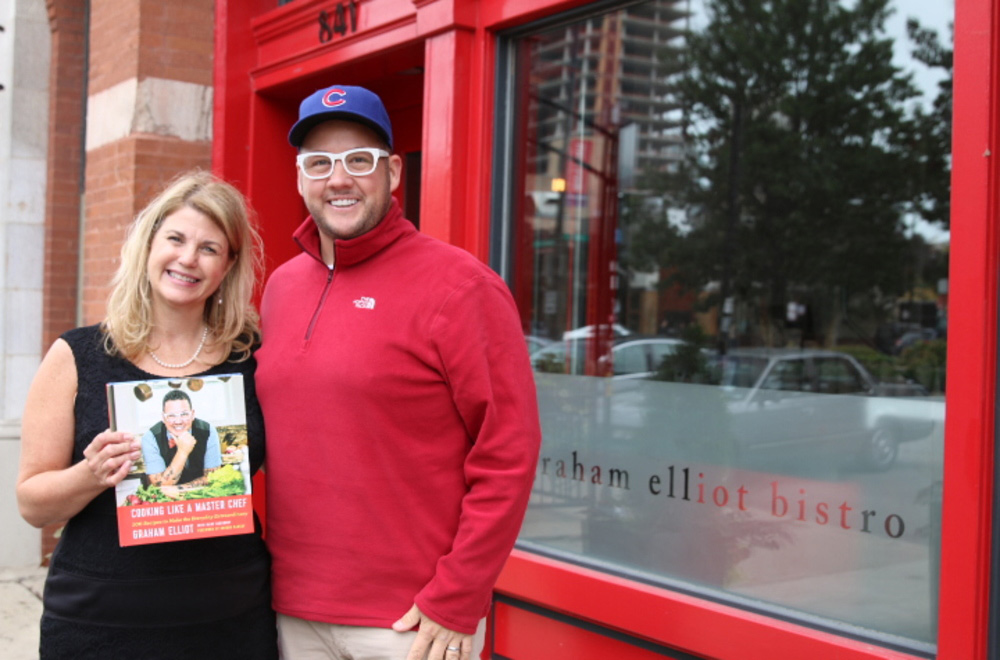 A photo with Chef Graham Elliot at his Chicago restaurant

Did you see The Revenenant? This film is based on the true story of Hugh Glass, an American frontiersman and explorer during the early 1800s.  After a vicious attack by a grizzly bear, Hugh was left for dead by two comrades.  In this epic movie, Leonardo DiCaprio portrays Hugh’s intense struggle for survival against the elements of Man and Nature as he crawls his way back to civilization. According to merriam-webster.com, the word “revenant” means “one that returns after death or a long absence.”

Yes, I could have chosen to feature a recipe for Steak Tartar (reflective of Leonardo eating uncooked Bison liver) or even Sushi (reflective of Leonardo stabbing a fish and eating it).  However, one of the most poignant scenes in the film is the moment when Leonardo and a friendly Pawnee are sitting down and laughing as they catch snow on their tongues.  How fitting to feature Chef Graham Elliot‘s recipe for Green Apple Rosemary Sorbet to pair with that pivotal scene.

Here is the delicious recipe and excerpt for Chef Graham Elliot‘s Green Apple Rosemary Sorbet that is featured in Cooking Like A Master Chef  Copyright © 2015 by Team Alliot from COOKING LIKE A MASTER CHEF by Graham Elliot published by Atria Books, a division of Simon & Schuster, Inc.

Sorbet is easy to make, and honestly, it doesn’t get more effortless than this.  Apples and rosemary – two pals that go together with such bravado, it’s a wonder why they haven’t been asked to make a buddy-cop movie!  They’re a perfect balance of tart and sweet, with the floral notes inherent to rosemary backing up the apple, making them perfect for sorbet.  for more concentrated flavors, reduce a cup or so of apple cider with some rosemary in the pan until it turns into a rich, heady syrup that can be added to the sorbet before it’s frozen, or serve it as a topping at the table.

Prep Time: About 10 minutes, plus freezing

Thank you Chef Graham Elliot! This recipe for Green Apple Rosemary Sorbet is a perfect pairing with The Revenant! Enjoy the Oscars and please join me as I tweet with Vanity Fair Social Club #VFSC

Which movie do you think will win Best Picture?