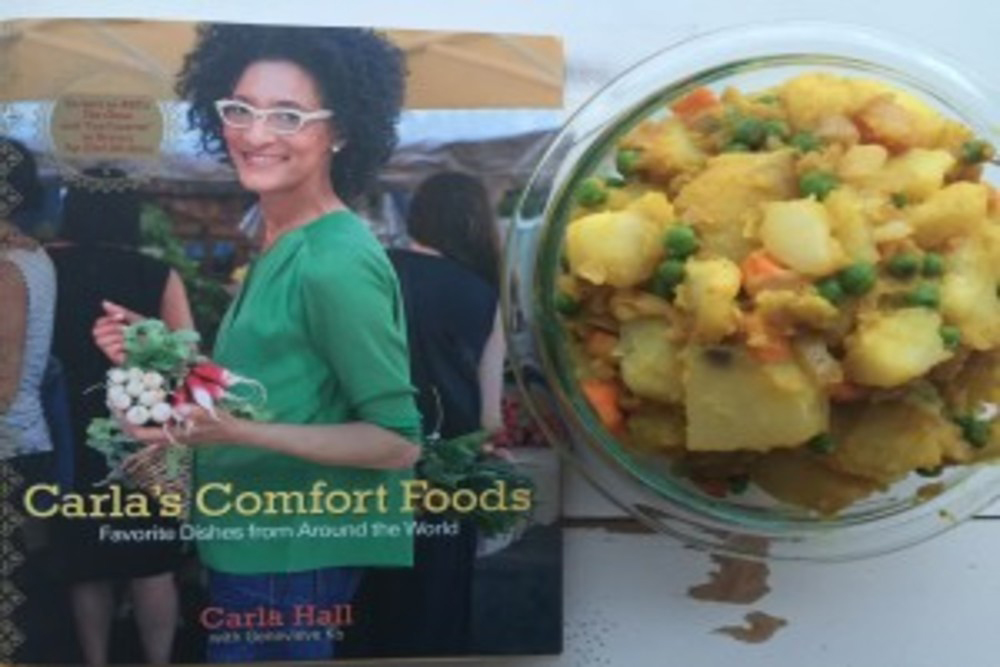 Favorite Line in Movie:  “However bad life may seem, while there is life, there’s hope.” Wasn’t the Oscar nominated movie, The Theory of Everything fascinating? This biopic of the theoretical, cosmologist physicist, Stephen Hawking, enlightens the audience about black holes and quantum physics, while providing the stark reality of living with a neurodegenerative disease, ALS.  In addition to Hawking, a true star that shines is his ex-wife, Jane (portrayed by Felicity Jones).  For several decades, Anne meticulously and lovingly cares for Hawking. The constellations of caregivers in this world provide such positive light! So which food shall we pair with this film?  The scene that inspired my recipe choice was a conversation during a meal.  In an effort to describe to dinner guests

what exactly Stephen Hawking does, Jane explains the theories of physics with a pea and potato.  The pea represents Quantum Theory, i.e. the set of laws that govern the small components of the universe.  And the potato represents the theory of General Relativity which governs  the large components of the universe, i.e. planets and stars.  In order to discover the theory of everything, Hawking has tried to combine the two; yet, he has not perfected this theory. However, Chef Carla Hall has perfected the delicious combination of peas and potatoes with her easy to make recipe for Curried Potatoes and Peas from her cookbook Carla’s Comfort Foods. http://www.amazon.com/Carlas-Comfort-Foods-Favorite-Dishes/dp/145166222X Copyright © 2014 by Carla Hall from CARLA’S COMFORT FOODS published by Atria Books, a division of Simon & Schuster, Inc.

INDIAN Curried Potatoes and Peas
Serves 4 Myhusband,Matthew,makesaredcurrypotato dish and I adapted his recipe when I was cater- ing. Potatoes can take a lot of spice, so I decided to go with a bold yellow curry. It’s important to start with potatoes that can hold their shape when they cook and then to cut them pretty big. Otherwise, they’ll turn to mush. Even though I usually make this as a filling for Samosas (page 165), it’s also fantastic as a side dish. 6 mediumYukon gold potatoes, peeled Kosher salt 1 tablespoon unsalted butter 1 tablespoon canola oil 11/2 cups diced yellow onions 1/2 cup diced carrots 2 teaspoons curry powder 1/2 cup frozen peas, thawed 1 cup Vegetable Stock (page 103) or store- bought unsalted vegetable broth
1Place the potatoes in a large pot and add enough cold water to cover by 2 inches. Gen- erously salt the water and bring to a boil over high heat. Reduce the heat to a simmer and cook until just tender, about 20 minutes. 2Drain well, then spread out in a single layer on a cutting board. When cool enough to handle, cut the potatoes into 1/2 -inch chunks. 3Heat the butter and oil in a large skillet over medium heat until the butter melts. Add the onions and 1 teaspoon salt. Cook, stirring occa- sionally, until the onions have browned, about 7 minutes. Stir in the carrots and 2 tablespoons water and cook, stirring and scraping the pan, until the water evaporates. 4Stir in the curry powder until well mixed.Then add the potatoes, peas, and stock. Cook, stir- ring to mix, for 2 minutes. Remove from the heat and serve hot (or cool completely to use as filling for samosas).