No matter where one falls on the political spectrum, I think everyone can agree that President Reagan was a great encourager who left a lasting legacy of patriotism in the United States of America.  I will never forget the once-in-a-lifetime opportunity of actually meeting him.

President Reagan has always been my husband’s hero.  As a young teen, Dave volunteered in Illinois for Reagan’s Presidential Campaign.  In honor of his hero, Dave and I named our oldest daughter, Melissa Reagan McSweeney.  When Melissa was two months old, Dave and I flew from New York to California to briefly meet with former President Reagan for a photo opportunity.  As a new mom, I was nervous about the long trip and about meeting a U.S. President.   However, President Reagan immediately put me at ease with his gracious demeanor.  He apologized for not being in a suit to greet us, but he was scheduled for a round of golf. 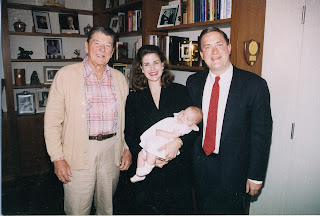 This life moment will be what I recall and treasure on President Reagan’s 100th birthday..