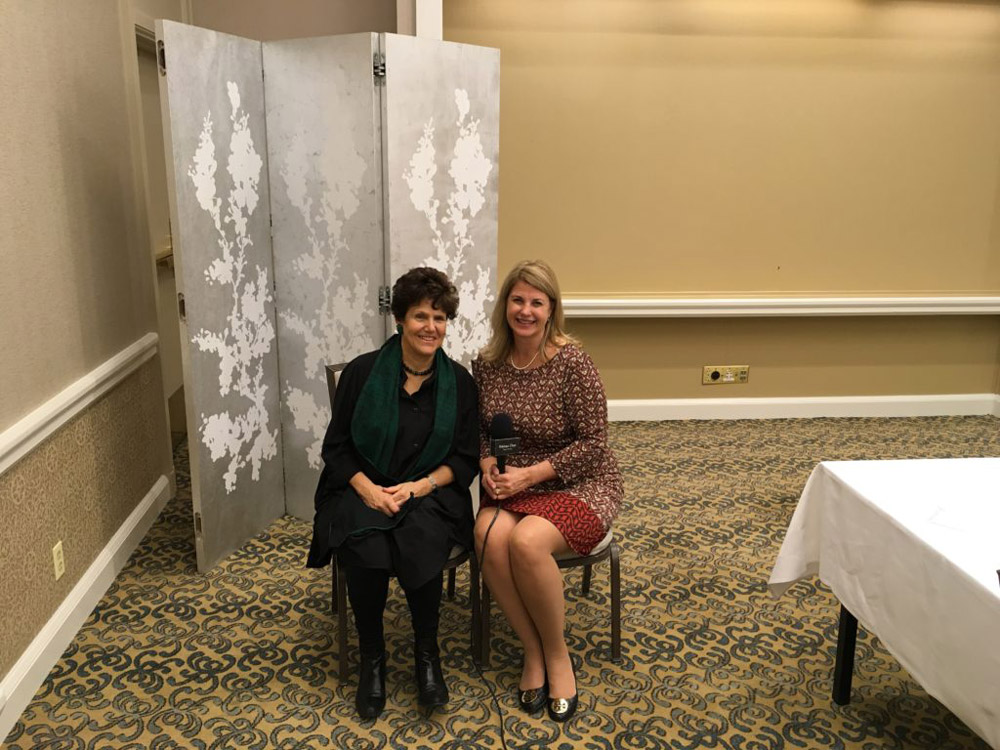 As we prepare for Autumn and the end of Summer’s bounty it’s an ideal time to look back on this fun segment with Joan Nathan on preserving foods.

“If you preserve the food, you preserve who your family is.” This poignant quote by Joan Nathan, an author of eleven cookbooks including her latest King Solomon’s Table: A Culinary Exploration of Jewish Cooking from  Around the World, truly captures the essence of why recipes matter.

It was an honor to meet Joan Nathan at Les Dames d’Escoffier conference in Washington, D.C.  and discuss the importance of preserving foodways.  Not until Nathan was married did she fully appreciate the influence Jewish foodways had on her family.  Her mother-in-law was a Holocaust survivor from Poland who remembered all the food and recipes from this country in such a beautiful way.  “It made me realize that I wanted to preserve them,” Nathan explains. After meeting a Yiddish folklore professor who also wanted to share his recipes and stories, Nathan embarked on her own ethnic foodways journey to preserve beloved Jewish recipes.

Joan Nathan shares her firsthand  experience of the power of how food brings people to the table and breaks down barriers.  While working for Teddy Kollek, the former mayor of Jerusalem, they visited an Arab village for a meeting, and everyone connected over Joan’s favorite chicken dish called  Musakhan (Palestinian Sumac chicken with sautéed onions).

Excerpted from KING SOLOMON’S TABLE by Joan Nathan. Copyright © 2017 by Random House. Excerpted by permission of Alfred A. Knopf, a division of Random House LLC. All rights reserved. No part of this excerpt may be reproduced or reprinted without permission in writing from the publisher.

Hummus with Preserved Lemon and Cumin

At mealtime, Boaz said to her [Ruth], “Come over here and partake of the meal, and dip your morsel in the vinegar.”

2 cloves garlic, or to taste

1 teaspoon salt, or to taste

1 teaspoon ground cumin, or to taste

The use of the word “vinegar” may be misleading in the above mention of hummus, from the book of Ruth, written almost three thousand years ago. Most translations interpret the word chamootz to mean “vinegar” (as it does in contemporary Hebrew). However, according to the Israeli author Meir Shalev, the Hebrew letters chet, mem, and zadek are the root letters of both the words chamootz and chimtza, which in biblical Hebrew means “chickpeas.”

“In biblical Hebrew, there were no vowels, so words were more confusing,” Meir told me, and added, “Anyway, if Boaz served his workers pita dipped in vinegar instead of something more substantial like hummus, they wouldn’t have been very happy.”

Hummus, meaning “chickpea” as well as “chickpea dip” in Arabic and modern Hebrew, is one of the oldest and most beloved dishes known to mankind. Originating in Mesopotamia, it is essential to the cuisine of the Middle East, served for breakfast, lunch, and dinner there for thousands of years. People never seem to tire of eating and discussing this ancient protein-rich paste.

Today, cooks soak and prepare dried chickpeas, often standing over large iron pots for hours until the beans fully soften. Early on, they learned to grind sesame seeds, which came from China to Mesopotamia, into a thick paste called tahina, which was stirred into the softened beans with some olive oil, garlic, a little salt, and pepper. This simple, sacred mix provided poor people their protein for the day, and the arrival of lemons from China added a dash of flavor that perfected this comfort dish of the Fertile Crescent.

In the 1960s, when Americans were traveling throughout the Middle East, they often came back with the taste of garlicky hummus on their breath. And with the advent of the food processor in the early 1970s, it was easy to prepare. In those days, you could only get hummus in mom-and-pop Middle Eastern stores in neighborhoods catering to immigrants, such as Sahadi’s in Brooklyn. Today, every grocery store has dozens of varieties.

Because I met my husband in Jerusalem, we requested hummus at our wed- ding in 1974 and had to give the caterer a recipe for the dip. One guest who had never tasted this before told me my recipe, with its hint of that exotic spice cumin, was so good I could sell it to Zabar’s. I didn’t heed the call but others did, and now hummus is marketed around the world. Even with all the brands sold today—and some are very good—I prefer to make my own. Try it for yourself; you will see how good it tastes, especially with the preserved lemon and the cumin.

Note Leftover hummus tends to thicken; just add some water to make it the right consistency. After a few days, freeze any uneaten hummus. Otherwise, with no preservatives, the dip will spoil. Baking soda just helps the chickpeas cook faster and breaks them down. And remember to add a little cumin, which is said to prevent gas.

Favism—Why Israelis Make Hummus and Falafel Out of Chickpeas

When Chaim Sheba, an Austrian-born geneticist, came to Israel, he noticed that some soldiers of Mediterranean origins came down with a blood disorder after eating fava beans or even, in some cases, after walking in a field with the fava beans in the springtime and smelling their pollen. This hereditary disorder, which causes people to have abdominal pains and vomiting, resulting from the rapid break- down of red blood cells, was discovered in 450 b.c.e. by Pythagoras, who warned about this favism, the dangers of eating fava beans for some people. Today, thanks to Dr. Sheba and others, we know more about this enzymatic disease. For that reason, Israeli cooks decided to put only chickpeas in their falafel and hummus.

What dish is your taste of home?