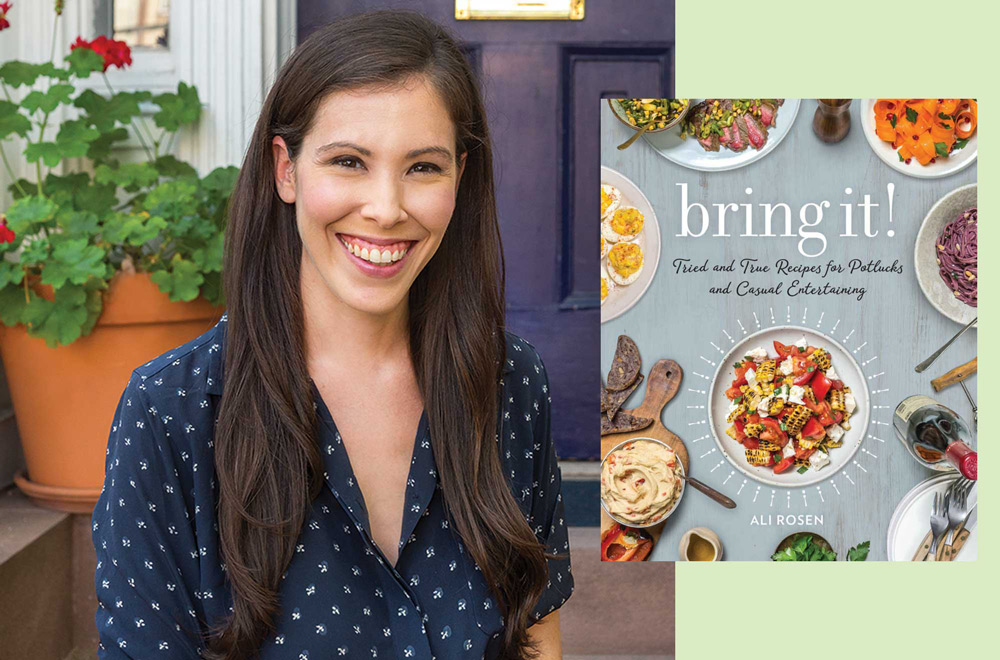 Ali Rosen is redefining potluck one dish at a time.  As she says, “If potlucks bring to mind covered dish dinners, it’s time to rebrand.  Think of them instead as outsourced dinner parties: when everyone brings a dish to share, entertaining is as easy as setting the table.”

As a Southern transplant living and working in New York City, Ali hosts a weekly television show, “Potluck.”  Her new cookbook Bring It: Tried and True Recipes for Potlucks and Casual Entertaining will inspire you to elevate what you bring to your next potluck.  Have you considered making Cauliflower Salad with Lime and Turmeric? As Ali explains, a potluck is no longer confined to casseroles in church basements, it can be a group of friends meeting in a home to celebrate events such as The Oscars or The Super Bowl and bringing dishes that fit with the theme.

If you are a guest at a potluck, make sure you ask a lot of questions, such as “Will I be able to warm this dish up in the oven?” As a host, you should make suggestions of types of dishes that your guests should bring. That way you don’t end up with a dinner of desserts – although that might be a fun theme.

Roasted watermelon pork ribs, on page 141 of Bring It!

Here are Ali’s three tips for the home chef:

What are your favorite dishes to bring to a potluck?

Reprinted with permission from BRING IT! © 2018 by Ali Rosen, Running Press

Cauliflower Salad with Lime and Turmeric

Sometimes an occasion calls for brightness. This salad embodies that while also being hearty enough to feel like a substantial addition to the meal. Turmeric has been lauded for its supposed health properties, but I love it for its subtle, lovely bitterness. It brings balance to the lime and add a beautiful color. This simple salad will stand out both visually and in flavor.
Makes 4 servings

How to Bring It!

This salad can be made ahead, but store the arugula separately—it wilts quickly if dressed too early. You can toss all the other ingredients with the dressing together at least a day ahead if needed, but save the arugula until the last minute before serving.