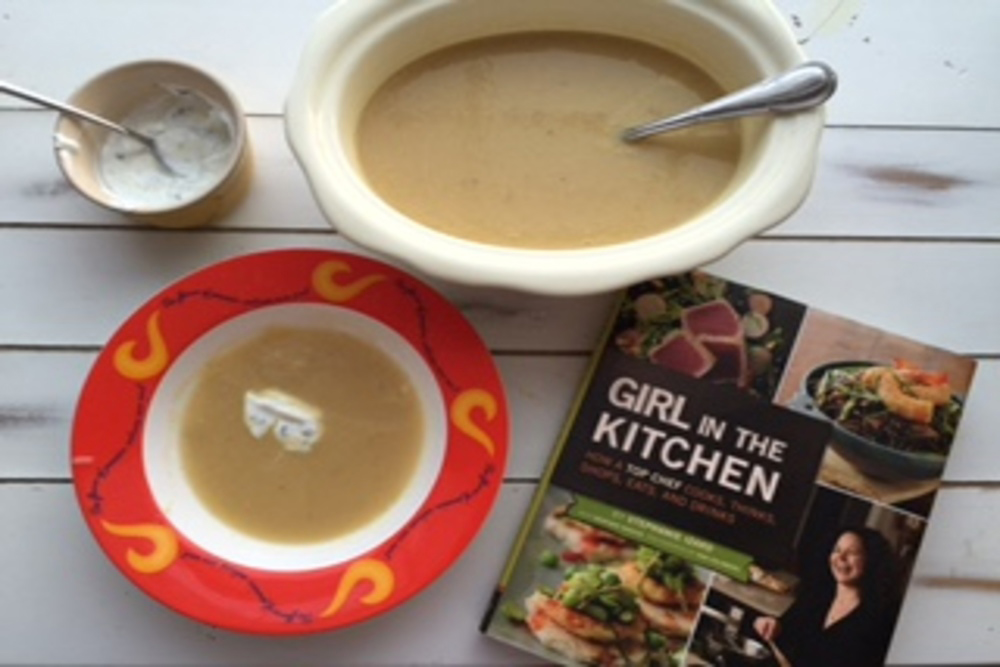 Chef Stephanie Izard’s Apple Soup with Tarragon Yogurt.     Favorite Line in Movie:  Sometimes it is the people no one imagines anything of who do the things that no one can imagine. The Oscar nominated movie, The Imitation Game is the compelling story of Alan Turing and the incredible Turing Machine he invented to decode the Nazi’s Enigma. Ultimately, Turing and his team are estimated to have saved 14 million lives by helping to shorten World War II by two to four years. In the movie, Turing is a bit socially awkward.  When his colleagues ask him if he would like to join them for a sandwich, he states, “No. I like soup.”  Keira Knightly’s character encourages Turing to engage more with his co-workers, and one day he brings apples for everyone.  Therefore, I thought the perfect film and food pairing for this movie is Top Chef Stephanie Izard’s recipe for Apple Soup with Tarragon Yogurt!  After making this delicious dish, I now have a new favorite soup. It’s easy to make, and the fennel really adds flavor. Please follow me on twitter @mcsweeney as I work and tweet during Oscars week in L.A. with Vanity Fair #VFSC.  I would love to hear your thoughts about food and film. Savor the day!

APPLE SOUP WITH TARRAGON YOGURT By Chef Stephanie Izard Ingredients: 1 1/2 teaspoons olive oil 1 1/2 teaspoons butter 1 cup chopped onion 1 cup chopped fennel bulb 3 garlic cloves, minced 2 Honeycrisp  apples, peeled and thinly sliced Salt Freshly ground black pepper 1/2 cup white wine 1/2 cup heavy cream 1 3/4 cups chicken or vegetable broth 1 1/4 cups apple cider 1/2 cup Greek-style yogurt 2 tablespoons minced fresh tarragon 1 tablespoon milk   1. Heat the olive oil and butter in a large soup pot over medium-low heat.  Sweat the onion, fennel, and garlic by cooking them until the onion is translucent, 3-5 minutes. 2. Stir in the apples, season with salt and pepper, then add the wine.  Simmer to reduce the liquid by half. 3. Meanwhile, cook the cream in a small saucepan over medium-low heat until it thickens, whisking periodically to loosen the little bits of browned cream that will impart a nutty flavor.  Once it’s reduced by half, set it aside for later. 4. Once the apple mixture has reduced, add the broth and cider and bring them to a boil.  Reduce the heat and simmer until the apples and fennel are tender, about 1 hour. 5. While the soup is simmering, whisk together the yogurt, tarragon, and milk until evenly blended and smooth.  Season with salt and pepper.  Refrigerate until needed. 6. Once the soup is ready, puree it with a tabletop or immersion blender until smooth, then pass it through a fine-mew sieve to remove any chunky bits.  Of course, if you don’t have a sieve and don’t mind a slightly chunky soup, you can skip this step. 7. Transfer the soup back to the soup pot, whisk in the cooked cream, and season with salt and pepper.  Divide the soup among bowls and top with a dollop of tarragon yogurt to serve..