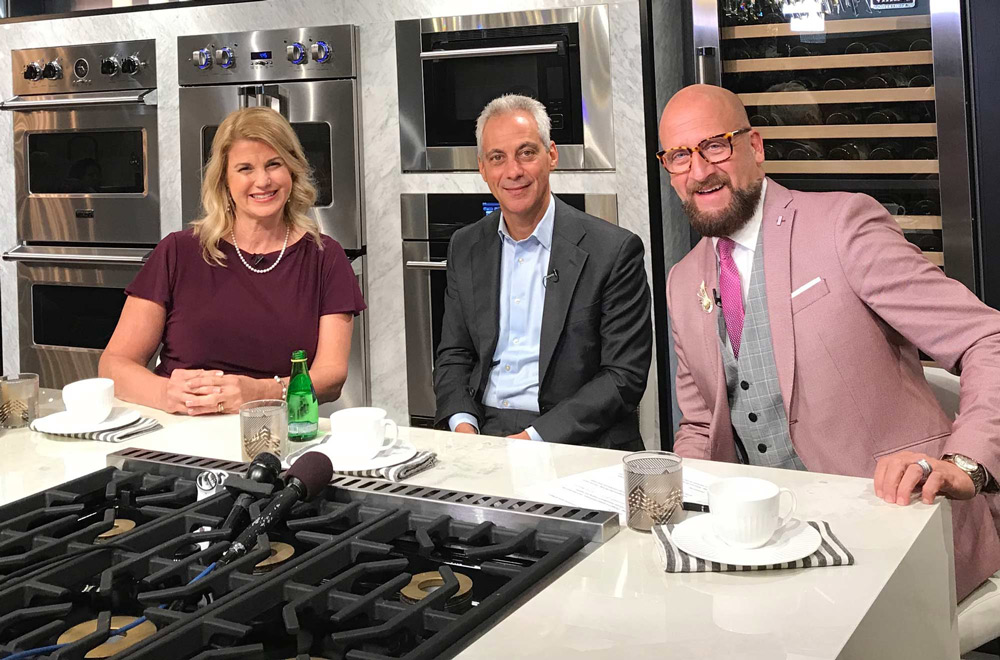 Just as James Beard is considered “America’s First Foodie,” Mayor Rahm Emanuel is “Chicago’s Foodie.”  He is credited for bringing the prestigious James Beard Awards (The Academy Awards of Food) to Chicago and has boosted culinary travel to the Windy City.   In 2017, Bon Appetit magazine voted Chicago as the number one restaurant city in America.  Recently, the Mayor joined my co-host and Viking brand ambassador, Chef Jaime Laurita and me in the Viking and La Cornue Showroom for a KITCHEN CHAT.

In addition to sharing his favorite places for breakfast in Chicago and naming the one dessert he cannot resist, the Mayor discusses the important role of urban farming in Chicago.  Did you realize that Chicago is one of the nation’s top cities for urban farming?

An important project for Mayor Rahm Emanuel is the Wings Metro Safe House in Chicago, a place where women and children fleeing from domestic violence can safely get a second start in life.  As a leadership advisory board member of Wings, I see firsthand the impact that Wings  has in changing lives, and the Mayor has played an integral role.  Viking also generously and graciously donated a new range to the Safe House upon learning that there was an immediate need for an oven.  During the Kitchen Chat, Rebecca Darr, the CEO of Wings, thanked both the Mayor and Middleby Residential, the parent company of Viking and presented a box of cookies that the children at Wings made for him in the new oven.  Mayor Emanuel was visibly moved.