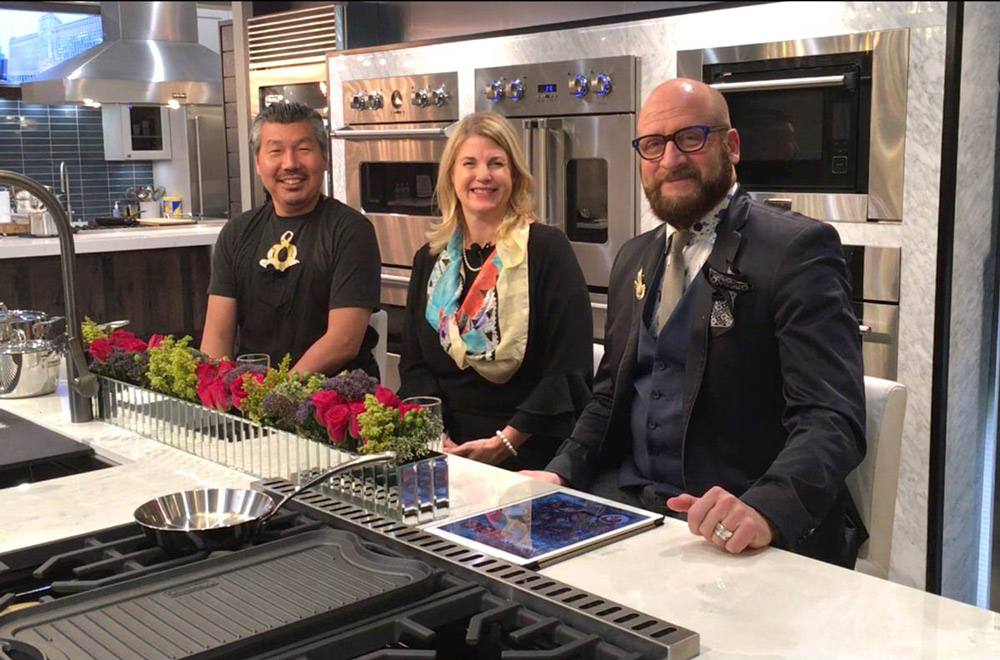 “There are differences but there’s more commonality in ethnic groups.  I try to find the common denominator of  ingredients in different cultures and apply it to what I do.”  Chef Bill Kim, UrbanBelly

Recently, Chef Jaime Laurita and I had a kitchen chat in the Viking and La Cornue Showroom in Chicago with Chef Bill Kim to discuss his new cookbook Korean BBQ: Master Your Grill in Seven Sauces.

A Kitchen Chat photo of me with Chef Bill Kim and Chef Jaime Laurita in the Viking and La Cornue Showroom.

Chef Bill Kim cooks without borders.  His cuisine at his restaurants (Urban Belly and BellyQ) captures and infuses the flavors of his personal and culinary journey.  At age seven, Chef Kim moved from Korea with his family to Chicago.  His childhood taste memories of kimchi intermingled with his love of Chicago hotdogs and the foods of growing up in an Italian neighborhood.  Chef Kim married Yvonne Cadiz who is of Puerto Rican descent, and a layer of his cuisine soon reflected the vibrant tastes of the Caribbean, a combination that he calls “Ko-Rican.”  His professional culinary training at Kendall College launched his career into the kitchens of some of the top chefs in the country, including Chef Charlie Trotter and Chef Jean Banchet.  Working with these masters, Chef Kim further refined his techniques, especially perfecting the mother sauces in French cooking.  In his cookbook, Korean BBQ: Master Your Grill in Seven Sauces, Chef Kim helps you master the seven sauces for Korean barbecue that serve as a “flavor foundation” for making more sauces.

Growing up in Alabama, I of course love fried chicken.  How fascinating to discover some Southern roots in Korean cuisine.  Chef Kim describes this southern connection as “Seoulfood.”  Chef Kim explains that during World War II, much of the basic training took place in the South and many military personnel brought with them to Korea their taste for Southern style food. These troops were missing their fried chicken, pickling and stews.  These elements and foods were already part of the Korean cuisine and melded together two cultures.

Kimchi is a staple and traditional side dish in Korean cuisine. It’s typically equated with something fermented and spicy.  Chef Kim uses kimchi as a verb.  He likes to “kimchi” his dishes.  It’s the “Magic Paste” made out of of Korean chili flakes, sesame seed oil, ginger, fish sauce and garlic and his secret ingredient of fennel seeds.   Chef Kim likes to “kimchi” apples, pears, carrots and many other types of produce.  He uses kimchi like salsa and eats it fresh.