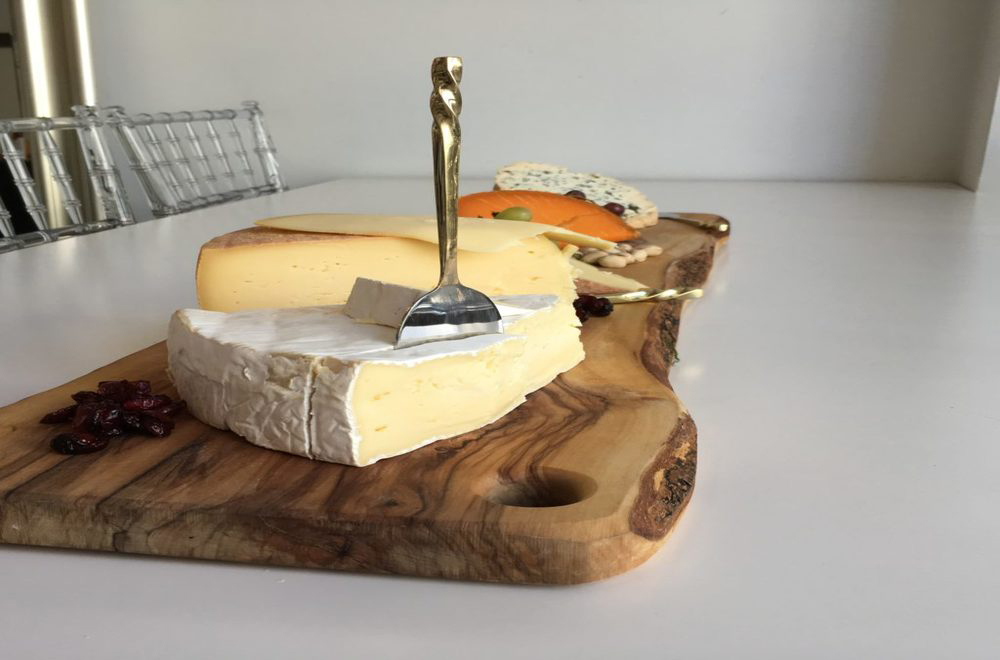 Celebrating The Cheeses of Europe

Are you ready to present the perfect cheese board at your next dinner party?  Charles Duque, Managing Director of North America for The Cheeses of Europe shows us how to create a memorable and delicious cheese board.  “A lot of American consumers are a little intimidated by French cheeses,” says Duque.  He wants to further educate the consumers about the exquisite cheeses of Europe and how to elevate the flavor profile of a dish with simple recipes that are “magnifique!”

On many of the cheeses of Europe, you will see the important symbol “PDO” which is a “Protection of Designation of Origin” which means  that the cheese is produced in a certain area, using a certain breed of cattle and assures the consumer that the taste will  reflect the terroir of the region.  “Very small herds are used in the French production of cheese,” Charles Duque explains, “Usually only fifty cows, and they are not treated with hormones.”

Three key take-away tips about making a cheese board:

These are the five cheeses featured on the cheese board that I sampled:

Brie: Known as “The King of Cheese,” this soft ripened cheese should always be served with a bit of the rind. It was paired with an Austrian white wine.  The brie melts in your mouth, while the acidity in the white wine cleanses your palate.  Duque also recommends pairing brie with champagne or sparkling wine.  Here is a recipe for Kale Salad with Brie and Grilled Chicken

Raclette: This monastery cheese is washed with brine (water and salt solution) that gives the cheese a stronger taste than brie while still being on the softer side.  Raclette is actually a preferred “apres ski” dish in Europe.  Here is a recipe for Warm Potato Salad with Raclette.

Comte: This semi-hard alpine cheese is aged in caves, many of which are Napoleonic forts dug into the mountains. The comte wheel typically weighs over eighty pounds with over eighty different flavor profiles ranging from farm to fruit.  This cheese pairs well with a Rose and is best served without the rink.  You can use it in sandwiches and omelettes.  Here is a recipe for  Baked Spring Vegetable Omelette with Comte.

Mimolette:  This beautiful orange cheese looks like a cantaloupe and cannonball.  Its color comes from the Brazilian annatto seed. This cheese was created for Louise XIV as a substitution for Edam cheese during the time that the French had cut commerce with the Dutch.  The aging process of mimolette creates a butterscotch flavor profile. Mimolette makes fantastic Mac and Cheese.  Here is the recipe for Mac and Mimolette

Fourme d’Ambert:  This blue cheese is the perfect finale for your cheese board.  Its spicy and pungent flavor pairs well with sweeter wines such as Sauterne.  France’s most famous blue cheese is Roquefort; however, that is made from sheep’s milk.  Any blue cheese made with cow’s milk will be much milder than roquefort.  Here is a recipe for Fourme d’Ambert Croquette with Apple and Honey.

What are your favorite cheeses of Europe?

It was an honor to be invited to cover a media event for Cheeses of Europe.  This is a sponsored post.

Posted in Cook with Margaret and tagged Cheeses of Europe
← Cheers to Michigan Wines!Finding the Flavors We Lost: Patric Kuh →