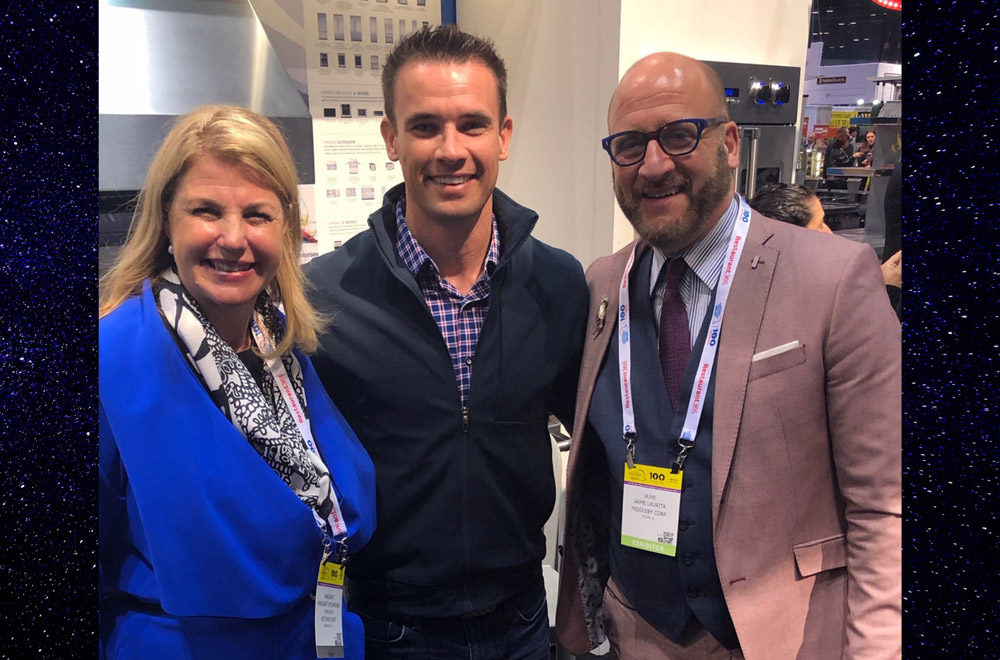 “We want to inspire Americans to be the best version of themselves.

You never know where my Kitchen Chat journey will bring me.  Recently, I attended an incredible Mastermind Group in the South Florida TikiHut of Fred Fishback.  What was extra special about this meeting is that Fred’s father and my father were both stationed in Nuremberg post World War II after Fred’s father valiantly served our country during that war.  My brother sent a photo to me and it appears that Fred’s father and my father are both in that picture! As you know, the reason I began my Kitchen Chat culinary journey is to honor my late father.  Meeting Fred is truly a hug from heaven.  And it was great to meet Fred’s friend, Chris Gannon, founder of Bolay, who provided a delicious and most memorable meal to the Mastermind attendees.

Fred Fishback and Chris Gannon at the TikiHut Mastermind

During his visit to Chicago for National Restaurant Show, Chris Gannon filmed a Kitchen Chat with Chef Jaime and me at the Middleby booth.  If you are an entrepreneur, you will learn some great insights into growing your own business and if you are a foodie, you will discover Bolay, a great fast casual restaurant group that Chris Gannon created to be a healthier option with nutrient rich foods.

“At Bolay, we recognize the importance of fueling your body with proper foods,” Chris Gannon explains. Having grown up in a culinary household (His father co-founded Outback Steakhouse), Chris understands the importance of creating “Comeback Flavor” to inspire guests to keep coming back to Bolay.  On a side note of interest, Outback Steakhouse just sold 1 billion blooming onions.  Chris’ dad had worked with University of Texas to have a certain onion that would bloom beautifully for the plate.

Forbidden Rice was one of my favorite dishes from Bolay.  Chris explains that it’s an ancient Chinese grain that only Emperors could eat.  Now anyone can taste this forbidden dish.

Check out Bolay and Savor the Day!